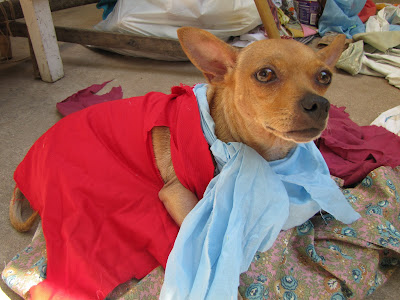 Oh yes, and and an impromptu kid-created dog-fashion show. Camp is fun. 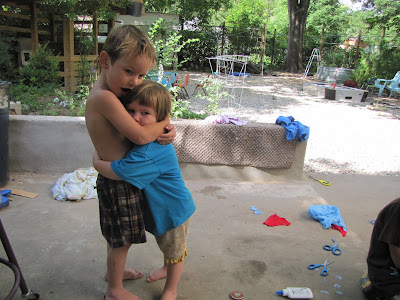 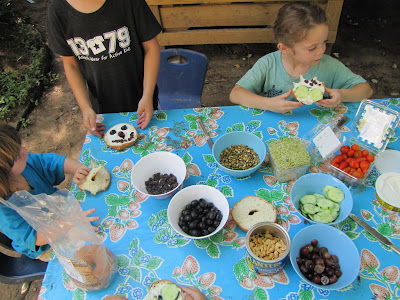 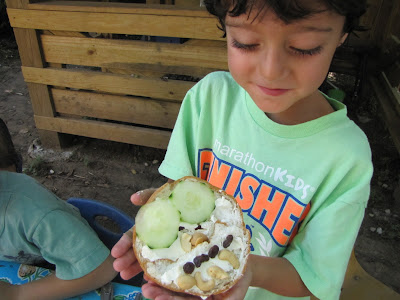 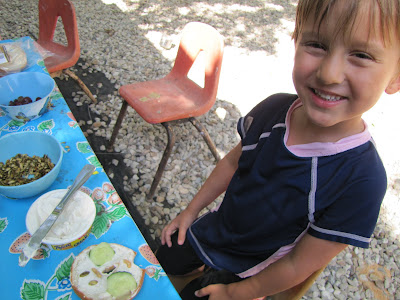 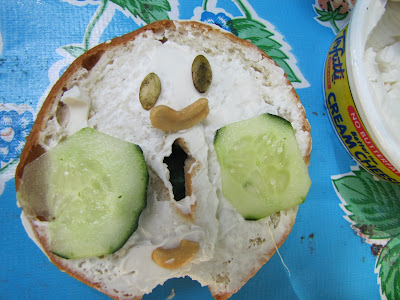 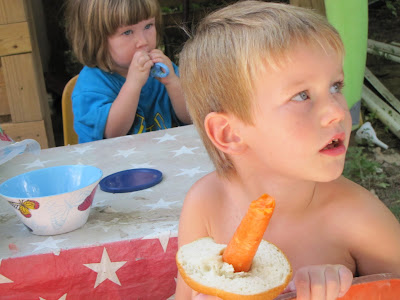 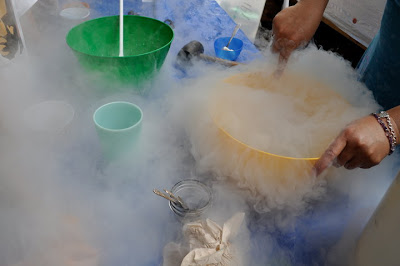 I was perusing the internet late one evening, always on the prowl for one cool project or another, when I encountered a video of a woman in a labcoat making more or less instant ice cream with the help of liquid nitrogen. In my innocence and ignorance I wondered how one would lay hands on such a wondrous substance... further internet searching led me nowhere.... so I wrote my friend who just so happens to be a chemistry professor. As it turns out, liquid nitrogen is not something your average Joe has access to... and rightly so because you could freeze your g.d. hand off if you're not careful. But also as it turns out my friend Dr. Ruth just up and offered to come make ice cream with my tinkerers! It was wicked cool (as my Boston friends like to say). First she dipped a flower from our garden in the nitrogen. It froze instantly, so stiff that she was able to easily shatter it. We experimented around a bit, trying out different combos of nitro and object, and then got down to ice cream making business, which is what you see pictured here. Fun? Yes. Delicious? Yes. Dangerous? My God yes, and in the best possible way (the way that is actually safe and exciting). Educational? You know it, baby. Wicked cool? I think we can safely say, yes. Dr. Ruth, we are so so SO lucky to know you!
(And thanks SO much to Melissa Prado Little for the great photo. She came to camp three times and took absolutely fabulous photographs.... I can't wait to share more.)
Posted by Kami at 10:32 PM 1 comment:

We built this during camp, of course. Truthfully it was completely easy peasy... but exciting nonetheless.
Posted by Kami at 7:14 PM 2 comments: 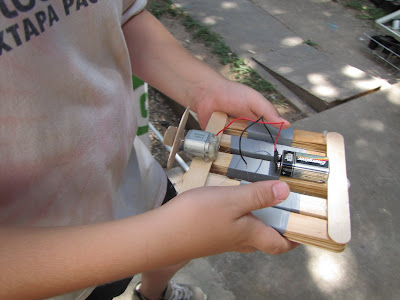 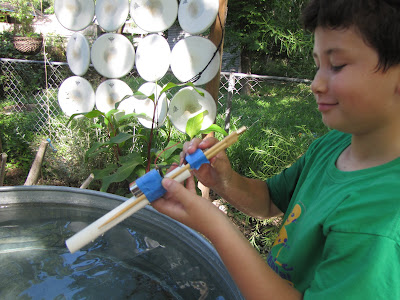 Whew! I can't believe it's all over. I can finally breathe. Just a little bit of breathing, though, 'cause I have to get back in the saddle for another camp that starts week-after-next. It's all good fun though. 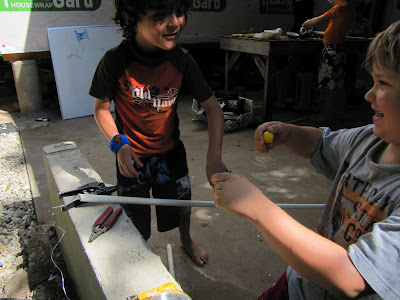 This was one of our best projects this week. The kids were really into it and came up with some fabulous ideas and designs. As you can see they were quite excited about it all! 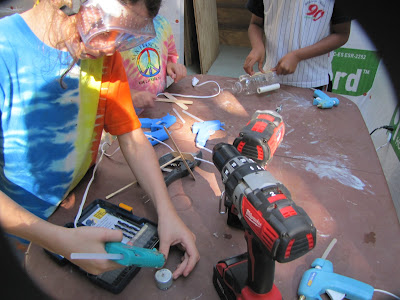 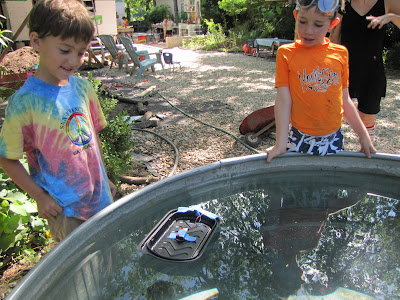 Oh, and one more thing I forgot to tell you... 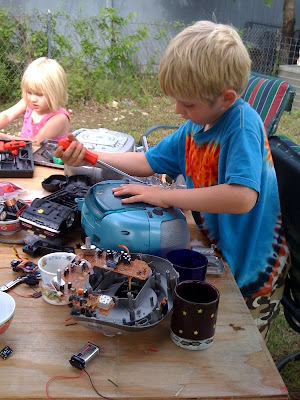 ... well I'm sure there's lots more things I forgot to tell you about the pleasures of tinkering with this latest group, but for now one wonderful little story just popped into my head. I had brought a few big bags of materials to work with. We were doing an egg-drop challenge and the 'materials' were really just a smorgasbord of stuff I had plundered from my recycling bin. But Ayden, pictured above, who just happens to be a master tinkerer extraordinaire, must have thought the stuff was a little more special than it was, as it had arrived specifically for tinkering. Whilst rifling through the strawberry containers and milk cartons he found a flier that was about a sprinkler park near my house, which had a picture with a lot of kids playing in the fountain. He showed it to me excitedly and said, "Wow! Look what these kids built!" and started pointing all the different parts of it and how he thought they had built it. It just really made my heart swell that he really just felt like anything was possible, that he could build anything he wanted to, just figure it out and build it. I think that is such a wonderful quality to have, and is one main reason among many main reasons that I want kids to have the opportunity to tinker. Kids who think that way aren't going to be saying, "Wow, it's really a bummer that they can't figure out how to seal the hole and prevent all that oil from gushing into our ocean. But I can't really do anything about so I wonder what's on TV."
Posted by Kami at 9:31 PM 2 comments: 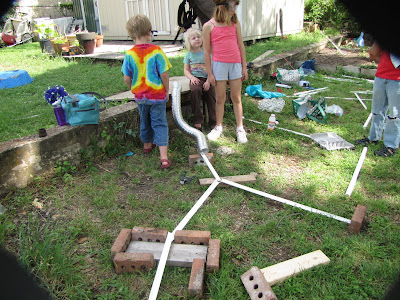 Man, six weeks with my homeschooling tinkering group just flew by! I can't believe I never managed to write about any of it until now. This class was the class of my dreams. This homeschooling mom, Christie Shore, came to the Gever Tulley talk and approached me about doing a class in her yard with her kid and others. So almost immediately after my experience with Gever I got to dive right in to using all the ideas and inspiration I received during his visit... with a group that was completely informed and on board with the true tinkering technique, to boot. It has been SO incredibly fun... I just can't tell you how much more fun and relaxing it is to 'teach' this way as compared to what I have done before.... there's just no stress about having to draw kids in to what you are desiring them to be interested in.... you just bring in an array of materials and tools and an idea, and then roll with what they come up with. 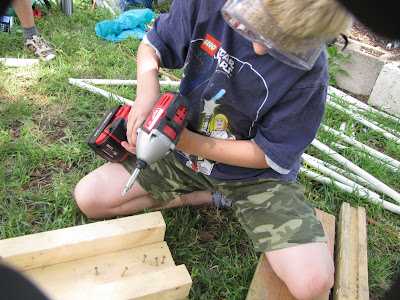 It is a beautiful thing to see the level of engagement and excitement that they have... and the problems they are able to solve, all on their own... and the things they are able to dream up and build.... yes I AM amazed at what children can do, and getting more amazed all the time.
These are just a few very not-so-good pictures I was able to snap in the midst of all the making.... I really need to get someone else to take some pictures for me of all these goings-on, 'cause it's really difficult for me to record these events when I'm elbow-deep in PVC pipes and kids running around with power drills, etc. A few of these pictures are from a day that we made a really fun marble run. I got a bunch of lengths of 1" PVC pipe and sliced it lengthwise on the tablesaw at Eric Billig's shop (Eric who is, by the way, one of the most innovative tinkerers that I know, totally pushing the boundaries of what can even be done with his chosen medium....). Then I just brought a whole bunch of mungo, marbles big and small, and also golf balls, and we all went to town. I thought this was a great project because it really could be a lot of fun for almost any age.... I know my 2 year old was having a lot of fun with it.
This next project, the boat building project, was actually done with some kids in my new summer series of drop-in tinkering classes (and there's still lots more of these to come, if you're interested). This project was straight-up borrowed from Gever (I'm pretty sure he'd say that was A-OK... at least I hope so... his blog is SUCH a gold-mine of exciting ideas and inspiration) and it seemed straight-forward enough, but I was pretty nervous going into it. It was another new experience for me, 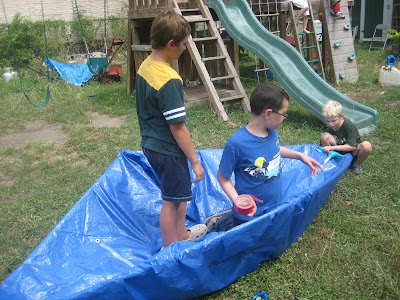 as I hadn't met the kids before that were coming to the class AND it was working on a bigger scale than I had worked on before. It ended up working out BEAUTIFULLY even though even more kids turned out than I had expected. The class of homeschoolers was mainly 6-7 year olds and this class had a bunch of 8-11 year olds who showed up and just went to TOWN without ANY help from me. They were so amazing. There were a few of the younger tinkerers from the previous class there and I think it was really cool for them to get to see what the bigger kids could do. Anyway, we have made a date to take them down to the creek tomorrow morning... I think we're all quite excited about that. 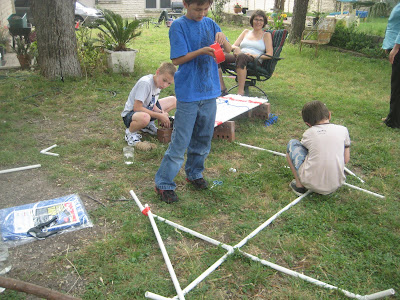 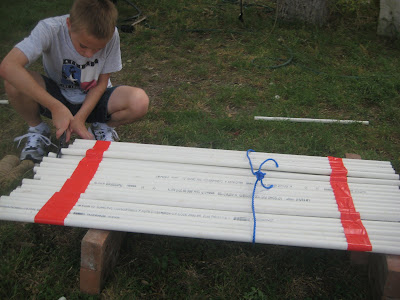